Namaste, much love and light I send to you. This image shows how all things we believe with our physical existence is all but an illusion. When we begin to awaken, we will realize that it is our own thoughts now that keep us here on this plane and that pain frequencies no longer need to exist upon our plane.

According to the teachings of the Divine, our earth, as shown in the smaller circle at the top of the image, is part of a great planet that the darkness overtook a long, long time ago, believing that they could control the universe if they captured it, but they were greatly mistaken.

Originally, this great light planet held the frequencies of the greater power of love and light. The star creators were able to create dimensions and beings with it with all great power to create greater love and light in the blue universes. However, the darkness, which was always after its own power and control, wanted it for their own greed.

As soon as they captured it, instead of finding the greater power and control over the universe, it found that this planet, powerful as it was, reflected the belief systems back to its owners. Hence, instead of finding great power, they found greater darkness and greater pain. As a result the planet dropped hugely in dimensions. It also brought down all planets which had been created with the help of this light planet as they were all connected to it.

Listening to the explanations of Caeayaron and Halisarius, the great battles in the universe existed, and it was very important for a solution to be found. The matter was discussed in the Great Galactic Federations of Light, that the three light grid programmers, Reuben, Harmonic Flows, Suzanna, Divine Love Element, and Ishmakael, Sacred Light Geometry Codes, would go to the darkest planet of control, (which used to be the greatest light planet) which is shown here by the large cube around it, to bring light to the planet so that love and light was able to return to it, thereby creating the way upwards for all Galactic Ascension to be possible once again.

The dark beings upon the darkest planet didn’t want the light and the love flows so it broke off part of itself and this part was thrown deep into space. This part became our planet earth where we are living upon today.

The circle around the smallest planet, which is our earth, represents the consciousness grid of mankind that the darkest beings tap into for greater power. By creating fear and pain consciousness to the humans, the darkness was able to tap into that consciousness and syphon it through to their own grid systems for energy ‘food’ for their own power.
Here the image shows the connection by the direct line from the smallest planet to the largest planet and how the larger planet is still being fed by our energies of fear and pain. Their time is restricted now because of the Great Awakening happening. The greater we come into our love consciousness, the more they will choke on our light until they are converted to the love and the light. However, as long as anger and fear is still present upon our earth, we are still feeding these beings through the darker grids.

It has been like this for many thousands of years and now is the time to awaken to this. When we become aligned with the Divine Pineal Gland Activations of Caeayaron, we link into our ancient Lemurian codes, and instead of feeding our energies of pain and fear into the darker grids, we become connected into the Crystalline Grid on a much deeper level and then we feed the violet flame with greater power into the darker grids helping all things to convert to light.

The beautiful awakening aspect here is that the darkness can no longer hold us down when we awaken to it. The Divine Realms have now cleansed our plane energetically to allow us to awaken and become strong upon our path to allow us to choose for the love and the light, or remain in our spiritual shadow selves.

Once we awaken to this and we begin to transform our thoughts up higher, we are releasing ourselves from the control cube, as it were, of the darker beings. They will no longer remain in the darkness either because we have the power, collectively, to bring them into the light as well as they are so connected to our planet and to us as we give them life via the grid systems as they cannot connect themselves into the power grids without machinery and without us.

It is all a game and an illusion. The cube itself shows the illusion with the mirrors and how, when we awaken to the illusion, we will be released. Look how thin the connection is. Imagine when we begin to throw the violet flame into the connection and receive the power from Caeayaron to release all the energies of pain upon our plane and within ourselves.
When do we awaken collectively to Divine Guidance? The Star Realms of Love are eagerly awaiting our response to this question also.

Quick Key to Image:
• Orange small planet above large orange circle: Our planet earth.
• Red circle around the planet: Human consciousness grid. Red shows the pain frequencies.
• Red line going into larger circle: How the darker larger planet feeds from human consciousness grid. Mankind’s fear and anger consciousness feeds them for their own power games. Our pain collectively is their energetic food.
• The larger orange circle in the middle of the cube: The dark planet is still connected to our earth as our planet came from their planet originally.
• The red circle on the outside around the larger planet: Shows the control and power grid systems.
• The blue double lines: Show the mirrors they use to magnify our pain consciousness so that our pain consciousness becomes exaggerated and it creates more power for them.
• The red maze flows around the large orange circle: Shows how the power, once it is created from the pain consciousness, is fed back into their own planet.

By learning to be in the forgiveness, and bringing in the violet flame, and connecting back into our Lemurian Sacred Love and Light Codes with Caeayaron, we can create peace and love in the darker dimensions as well as on our own planet. 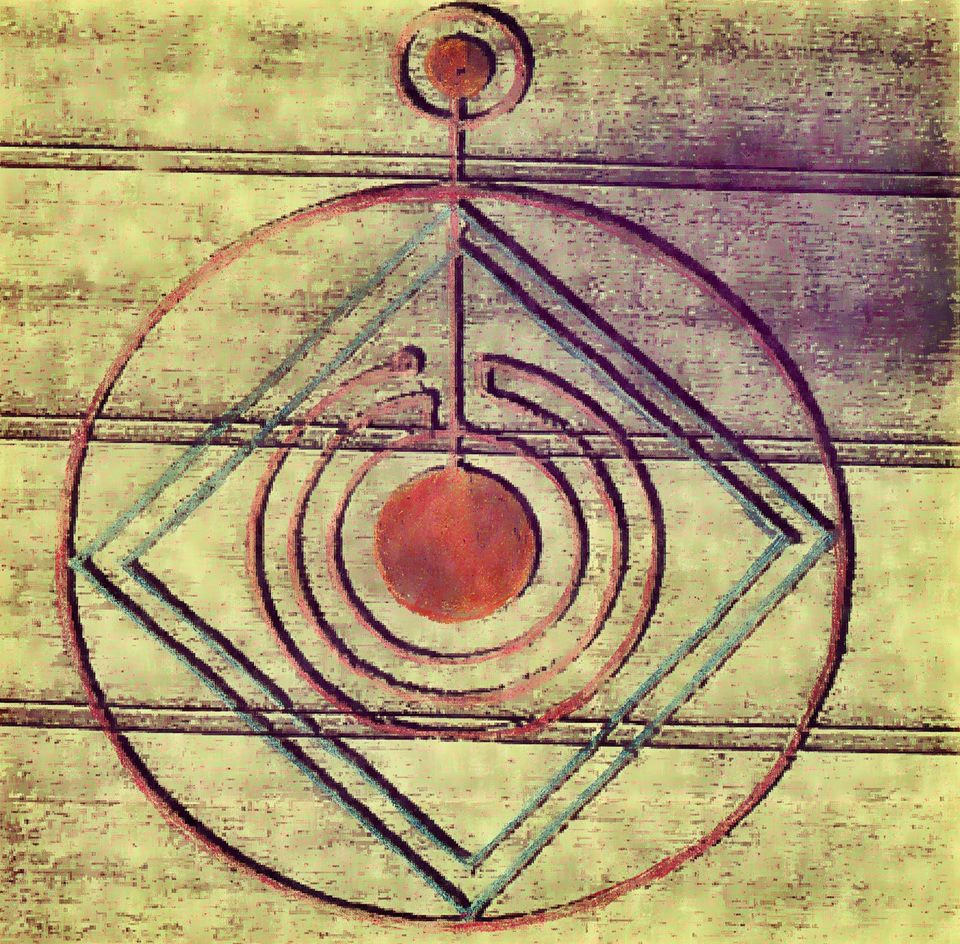