Translated by Suzanna Maria Emmanuel, with the guidance from the Galactic Federation of Light Society.

Namaste, I send you much love and light always. The message our dear star friends are sharing with us here is how great the intelligence is of the universe.

The intelligence of the universe constantly profounds me. As I learn more and more about the universe and its forces, the more it astounds me.

Everything within the universe is intelligent. There is not one part that is not intelligent. Everything serves as a purpose for greater evolution. All things in existence, whether it is on our earth or in space, connects to each other and speaks to each other, and then reports to a great centre, a little like a command centre. At present, I am studying the universe very much with a great scientist who used to be alive here on this earth but now is in spirit.

A few days ago he took me (in meditation as he helped me to see through his eyes) deep into the universe, helping me to understand the universal arrangement of great intelligence. When I saw this crop circle it was just like what I had been shown by the scientist.

It is completely created with life force energy that of the purest love where all forces are created from.

Its prime task is to gather information and data from all universes and existence. The reason for this is for greater learning. It constantly seeks to understand all thoughts of all existence within all parts of the universe as it constantly strives for greater evolution, greater existence, greater knowledge and greater love expansion, as the centre of the universe is all about pure love.

Love in its pure creation form is the strongest force in the whole universe. It is from this force that all things were created and are created and will be created.

In the centre there is a very strong force field, filled with magnetism. It is so strong that nothing can truly exist within it, except the data of the universe. It's size is so huge, we cannot even comprehend it. Its purpose is clear; to create greater flows of evolution in the universe, to allow other universes to come into existence which are in agreement of all it is learning.

The beautiful thing here in this image shows is that nothing is disconnected. Even though we cannot see the greater spaces of universes, we are connected to all other universes. It is as if a space exists in between all the universes that doesn’t appear to exist as we cannot see it with our physical eyes, but it is this very centre like space that forms all of creation.

Whole universes come into existence because of the information it gathers. What doesn’t it want? What does it like?

What I have learned, from a higher universal perspective, is that we, as mankind, are still permitted to exist according to the universal rules (despite our collective thoughts not allowing for greater evolution to happen, given their collective destructive nature) because there are many people here upon this earth who desire the greater spaces of flows. Our earth is therefore permitted to carry on, as if it is seeking more answers; more ways to expand in greater knowledge.

Constantly we are being studied by the universe and our thoughts are collected in thought banks which become a force in itself, to create more or destroy more.

It shows how important it is to learn to work with the flow of the universe, so that we can become more in touch with higher intelligence and higher beauty.

Namaste, I send you much love, flows of wisdom, light, growth and healing always,

Yellow circle and ring in the centre: Forcefield of universal love. Within it, it holds higher programmes of balance and existence. It constantly collects all the main data from all spaces within the universe. It refines, plans, delegates, assigns, learns, programmes, allows, releases, creates, births.

The centre also serves as a 'memory centre,' where all information for the entire universe and a memory of all in existence is stored.

The yellow little circles on both sides of the yellow vortex: This shows how it is all connected and in balance. The whole universe is connected to the great centre and sends its data, greater findings through to all other parts of the universe. They are part of a ‘balancing wheel’ also and also allows the magnetic balance to be perfect for greater perfection to be present.

The flows in the centre: Shows how all data is flowing through to its command centre. The red shows the lower thought ranges and the blue shows the higher, more refined thought ranges. Both are examined greatly by the centre of the universe.

The blue circles: The vortexes, all connected to each other. Each vortex collects data for its own universal spaces for the purpose to bring it back to its intelligence centre. Its large magnetic forces within it is so great it is impossible for anything to exist within it.

They collect all the data from all the stars and all of intelligence and fed through to be examined. 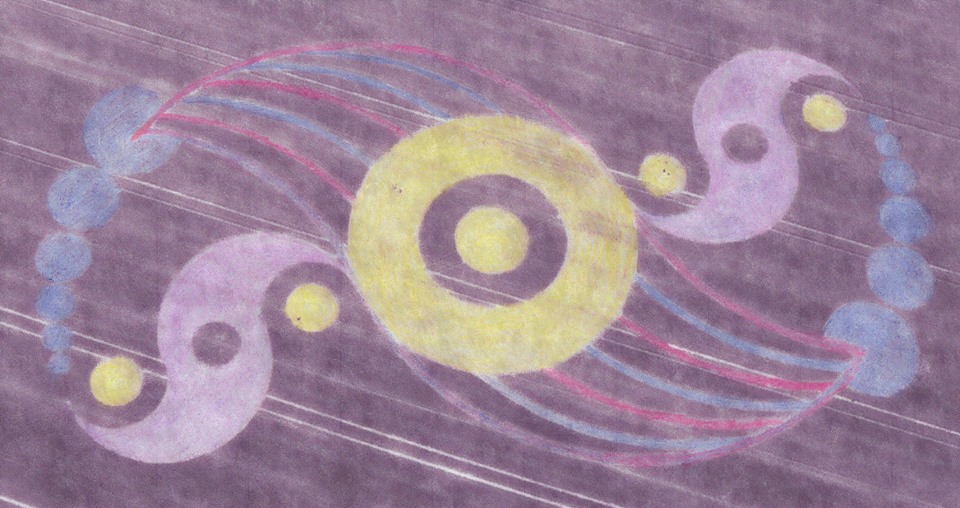