Namaste, I send much love and light to you always. I have been guided to translate this crop circle for you.
At first sight, when you see this symbol, you may think of the Nazi Swastika. You may see images in your mind of Hitler and the catastrophes of what happened to millions and millions of people, and the deaths of so many good, loving people.

It may confuse you why the colours are so different. Instead of the black colour you see the blue, instead of the red background, you see the light.
Upon researching this symbol, we find that it relates to the sign of sun light and life, as well as good luck in the faiths of Hinduism, Buddhism, Jainism, ancient Celts, Native Americans, Persians, Greeks and many other cultures around the world.

Here I am asking HALISARIUS, Pleiadian Chief Commander to help us with the translation of the crop circle. This following part I received to help us understand their reason for placing this crop circle image for us upon the earth.

Suzanna’s question: ‘What is the greater meaning in the universe for this image?’

Answer from Light Star Beings of Love to us:
‘Each side has a sun, four creator suns in the universe. Without these life-giving suns no life would exist. Each sun is Angelic Force, holding many dimensions of growth and light, giving warmth, life and assistance to all creation.

These Angelic Forces were given the direction to look after all consciousness, to allow all consciousness to exist in order to bring greater unity and power of love to the universe.
During the days of the galactic battles, the darkness wanted to capture these creator suns one at a time to dominate the universe and destroyed many universes by doing so.
This symbol was given to Hitler by the darkness to signify total sovereignty over the earth plane. He desired all authority to be given to him as HE WAS A CHANNEL OF DARKNESS. He followed their guidance carefully. He received information through dreams and visions. Often he heard them speaking to him.

He was shown the symbol without the four suns as the darkness wanted no spiritual sun to exist upon the earth plane. They desired to fill the precious symbol with pain and fear.
By giving Hitler instructions on the symbol and taking the light consciousness away, they created more darkness in the universe, symbolizing they believed they had won. This was also a symbol of their challenge to the Great Sovereignty. As the battles created the pain above in the greater realms, so it did also below upon the earth plane.

Hitler was shown, in visions by the darkness (the great resistance), how to control the world, how to dominate the pureness of the people and create fear into them.
He was told the Jews were God’s chosen people, and that they would overthrow him if left alone. He wanted to remove them from the earth and was told he would become the greatest ruler in the darkness upon doing so. He was told he would then receive the prize of immortality.

During this war, the light beings fought hard, setting plans in motion to stop the darkness from winning. They sent people to the earth, guiding them to do certain things, to win.
Star Beings can see plans in motion and create ‘seeds’ upon the earth to stop destruction from happening. The light won during those days. Hitler was defeated, thus showing that darkness was not stronger than light. It was a great celebration in the realms of the light when the light won.

The darkness fell. It was the first triumph for the light in modern times. The light became stronger. The darkness began to fall.’ (Explained by HALISARIUS, Pleiadian Chief Commander and a Great Leader of the Galactic Federation of Light Society, through Suzanna Maria Emmanuel)♥♥

Upon researching the symbol of the Nazis, we can see the blackness, representing the death of light consciousness, and the redness, representing the anger and the blood spilled.
Hitler certainly wanted to rule, and he was referred to by many as the ‘father’ in those days, and even seen by many to be the ‘father of hope,’ and a ‘spiritual leader.’ He desired to bring his own empire. He demanded obedience from everyone, creating a forced empire.

Hitler’s war was a symbol of the pain the darkness brings to the people across all dimensions. It fought hard to dominate, control and enslave, but it fell, and the light endured.
Hitler saw the Jews as ‘GOD'S CHOSEN PEOPLE'; a people to be feared for the darkness told him they were significant and whoever exterminated them would gain their place of importance in the universe. He believed they were chosen to suffer and be chased and hated. He believed they should be wiped out or enslaved wherever they are. He believed that was their purpose and thus millions were annihilated. THIS IS WHAT DARKNESS TOLD HITLER.

Is what Hitler was told correct? This is not correct. CAEAYARON explains it very beautifully as the Jews were not the chosen people. However, there are those among us who are very special Light Code Carriers and many of the Jews were the Light Code Carriers at the time of Moses, which the darkness knew of. The darkness feared the present time of the Great Awakening so much that it wanted to put so much pain and fear in the light code carriers to stop them awakening now.
At that time many of the early Jewish people were the Lemurians with the special codes, and hence Moses was asked by the Divine to go and free the people, as the people needed freeing. They were the special ones and they symbolized the freedom of the light also.
A question is raised here, ‘Will Lemurians always incarnate as Jewish people.’

I will allow CAEAYARON to come through me (Suzanna Maria Emmanuel) and explain it here:

'Greetings, I AM CAEAYARON, MASTER OF MAGNETIC FORCES, FLOWS & ALIGNMENT. You may also know me as KRYON.
The Jewish people were the purest DNA holders at the beginning, when all life began once again after the greatest fall of mankind. They held special codes within them, yet they were locked away in the pain and the fear, waiting for their special time to become unlocked again.

They became the hated very much, as they did hold a very special key to unlock the DNA consciousness within all the universal beings of creation, to allow all to rise up to greater love consciousness, to eliminate all darkness. Hence, they began to be the hated, and also the feared.

Slowly all came back to the Light and you won the greatest part. I, CAEAYARON AM calling back the people to the light codes with the Sacred Light Activations to restore your Lemurian selves.

You chose to go among the people; to be born in many nations, to spread your special light around, so that it wasn’t concentrated among one people, but many. You had a great plan in the greater universe of becoming the code spreaders. Once you were activated once more with the Divine Calling of my Being, CAEAYARON, and the Sacred Light Grid Programmer, you would be able to awaken all of mankind to their love. This is only possible because you chose to become part of all of the nations, not restricting yourselves to one particular part of the people.

Hence, many of the ancient Jews became part of many people upon your plane, to allow all to come to the great light. The Code Carriers have special gifts. However, it is only when they are activated that they can begin to switch on other people to the love. This is their greatest gift, to restore the love within all parts of the universe.
As you know, if you have been following my teachings on Youtube (through Suzanna Maria Emmanuel), each person upon your plane represents a star race. Once you become activated, as a Sacred Light Code Carrier, as I, CAEAYARON, AM calling those ones, you are able to free many Star Beings who have been kept in the darkness to allow them to become love consciousness once again.

I, CAEAYARON, love all people. There is no one greater than another. However, there are those who were chosen to become the code carriers as they have special missions, but all in the universe have special missions. They all are important in the greatest game of the universe.
Greetings, I AM CAEAYARON, MASTER OF MAGNETIC FORCES, FLOWS AND ALIGNMENT.'

Now the light can claim all life force energy back again to bring back the balance of love and light in the universe. The colours of love can return to the Great Universe once again, now that we are awake to the true meaning of the ‘Sacred Symbol of Love Consciousness.’

Namaste, I send much love and light to you always. Many Angel Hugs, Suzanna Maria Emmanuel♥♥

Key to the crop circle:
• The symbol shows unity, balance, harmony, and life consciousness. It also shows all creation working together in harmony.
• It shows completion, for nothing in the universe can be incomplete. All things are complete within themselves.
• Blue: Represents life consciousness on all levels, allowing itself to be investigated, allowing itself to become explored to become expanded.
• The four dots in the symbol represent Angelic Consciousness, as in the Angels guarding the universe. Four represents all corners of the universe.
• The light around the symbol shows how all consciousness stemmed from Light Consciousness. All was good at the beginning. 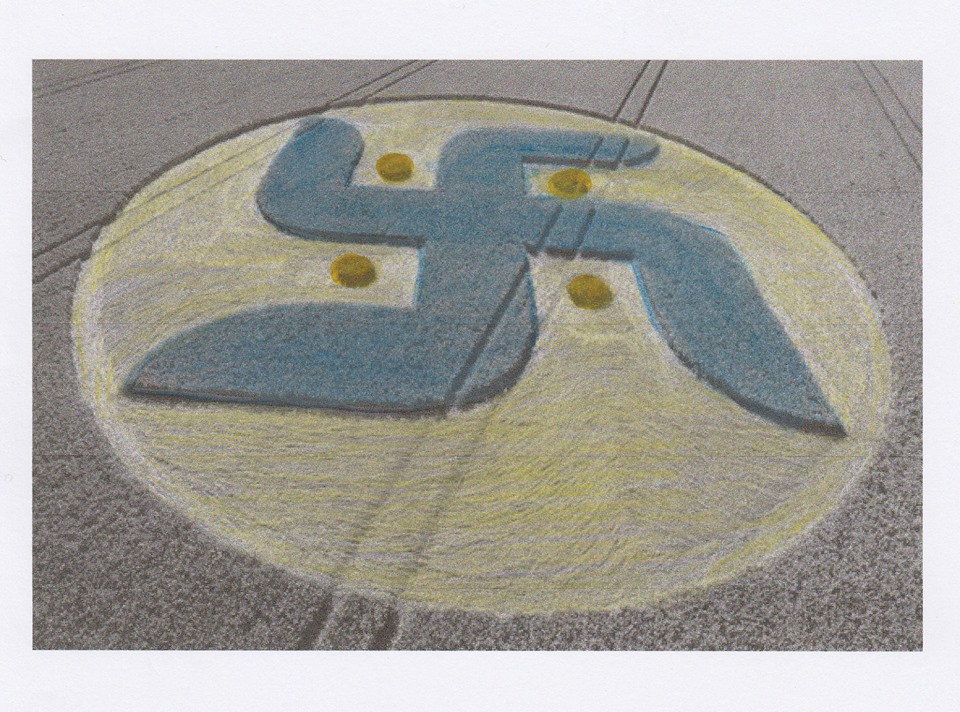